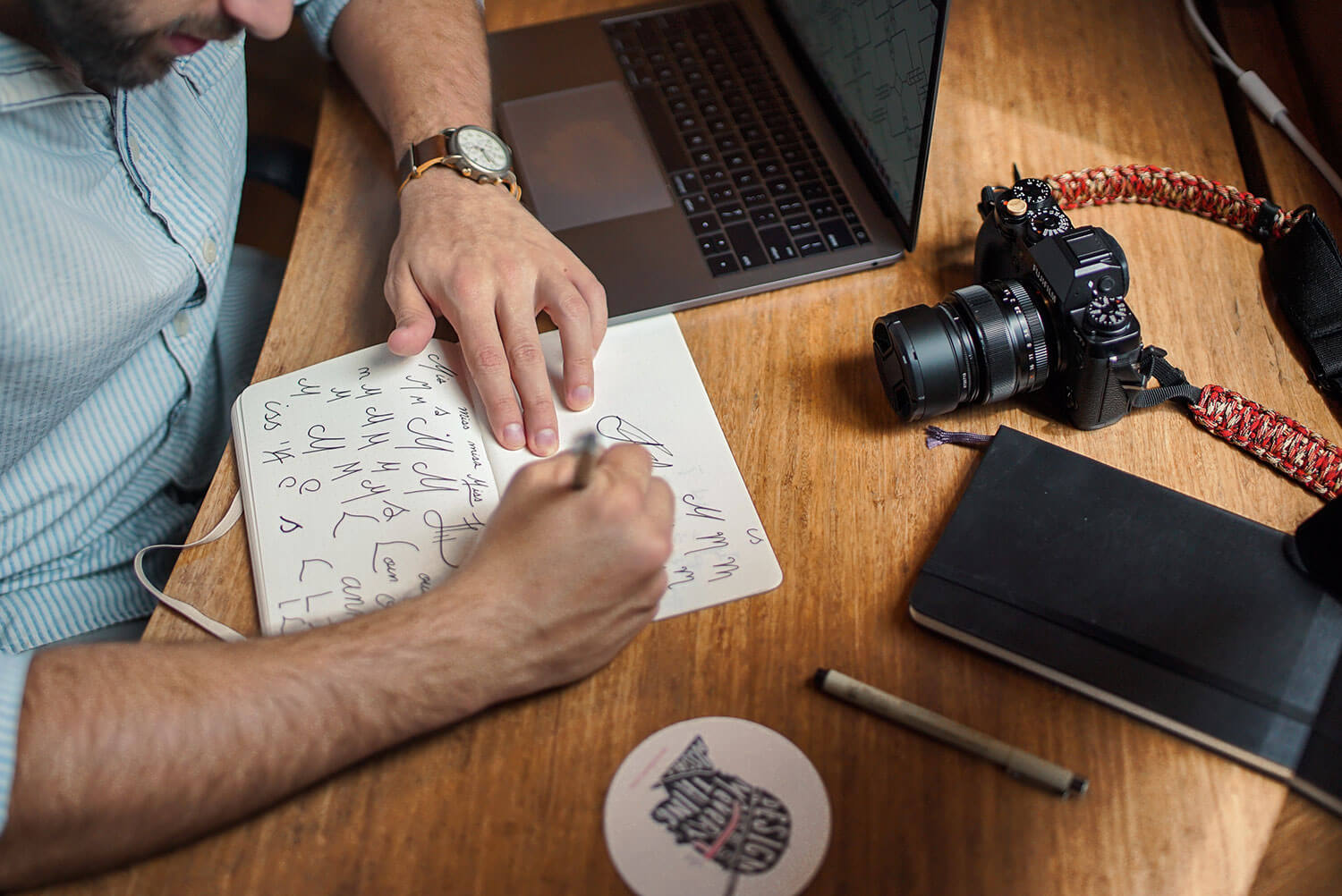 Design trend predictions usually come out at the beginning of the year, but who said we can’t write a blogpost about it in the middle of summer? Logo design forms the most essential part of every company’s branding, so looking at some inspiration always comes in useful. However, following logo trends mindlessly without thinking about our company's mission, values and target audience definitely doesn’t make for a smart decision.

Just to keep it classy, I’d like to start with a quote from one of the biggest fashion icons, Yves Saint Laurent. “Fashions fade, style is eternal.” To fit this to logo design: Trends fade, logos are eternal. But they evolve over time.” The recipe for the best logo includes a timeless idea combined with a trendy style.

Another fashion example: Jeans have become the most common everyday clothing item, a staple of modern Western society. Do jeans look the same as they did in the early 1900s? Hell no! Trends have changed every decade. Hippies wore flared jeans, overalls became super popular in the ’90s, then came the skinny jeans craze with Britney and now the high-waist boyfriend. Jeans will continue to change in the future but the concept stays the same: comfortable, durable and versatile.

The best logos do the same. So without any further ado, let’s see how logo trends have been evolving the last couple years.

Logo designs come in all shapes and sizes

We are living in a digital world now more than ever, so companies have to maintain a presence on as many platforms as possible to reach a global audience. Better quality screens display every detail of an image in every color of the rainbow. This opens great possibilities but also tells us we have to create versatile logo designs and perhaps follow logo trends. At UX Studio we always take responsive design into consideration whether we’re designing logos or interfaces.

Designers and those who have worked with one recently know to value a logo as nothing in itself. You need it on your website, social media, phone screens in the navigation, a billboard, as an app icon and maybe even on a pencil or a mug so you can to give your clients in a goodie bag.

The classical logo anatomy consists of a symbol and a logotype which work together as a whole. However, once a brand has become established well enough, it commonly abandons the logotype since once everyone knows the company’s name. In other cases (especially in the digital era) brands have multiple versions of their logos. Sometimes the symbol suffices, sometimes you need the whole thing.

Mailchimp redesigned their logo recently and added their well –known mascot, Freddie. They can use him independently as a symbol in any size (looking cool in the navigation or on a T-shirt as well) or they can write out the company name. The animation with the winking chimp provides an extra layer which adds to their friendly tone of voice. Brand research makes up a very important step when you make such great decisions this big.

Animal Planet must have had the same idea, since they also updated their brand in quite a radical way. OK, compared to their previous logo. I still remember the old elephant and globe (yep, a lot of time has passed since I last watched). Although they don’t use the nicest elephant symbol I’ve ever seen, it reinvents that old idea in a contemporary way. As time fades, it will surely work on its own as well.

People indisputably talked the most about Slack on the topic of logo trends in 2019. Millions detested it! Debates raged for weeks! Still, Slack communicated their reasons very openly and the change really made sense in the end. The old symbol just didn’t stay consistent across different platforms. Also, a hashtag really doesn’t present a strong metaphor in 2019 since almost every social tool we have uses hashtags. The new logo has succeeded so far, leaving me curious if they’ll change again in the future.

Everyone regards the logo as the single most representative feature of a company, so how come some people use more than one? To this tricky question I can only say you have to play it smart. Zocdoc, London Football Exchange and Zendesk all provide good examples. They keep the most important part of the logo and change the rest. This way, the memorable part (the idea) stays intact while you have a ton of freedom to play around.

The older the brand, the cleaner the logo

This logo trend connects with versatility as well, although it has somehow gone to its extreme. In the last five years, huge brands such as Google, Microsoft, Airbnb and Pinterest have redesigned their logos for minimalism, and we see no end in sight.

Uber had a redesign in 2018, just two years after they’d introduced their previous logo. They also designed a custom typeface for the brand to make the app consistent in every language. At least this latest ho-hum sans serif logotype clearly improves on the 2016 version.

Two very established fashion brands, Burberry and Calvin Klein, changed their logos and went with the all-caps sans serif logo trend. They’ve come from very different times, with Burberry’s late 18th century typeface and Calvin Klein’s 70’s avant garde. I wonder how later generations will remember this new era when we hide all the history from our logo designs. 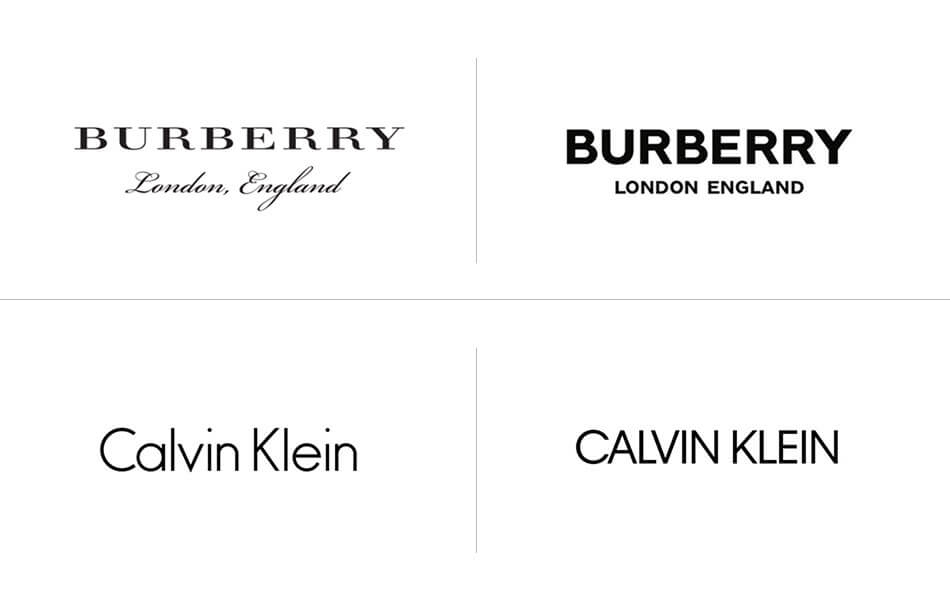 AmEx presents a great example of refreshing an old logotype. They got rid of the old-school gradient, chose a nice contemporary blue shade and cleared up the letters and the outlines. Even though non-designers likely didn’t even notice the new logo, a side-by-side comparison shows the striking difference.

The shorter, the better

If a brand ages well, more and more people will know it, slowly making it a representation of its industry. When you think of fast food, you most probably think of McDonald’s. If you think of computers, Mac and Windows come to mind. Our brains work like this; they need examples to interpret what’s going on in the world.

Absolut Vodka recently became Absolut. Dunkin’ Donuts shortened its name to Dunkin’. These logo trends take it for granted that people already know what kind of beverage they’ll get if they walk into the store. It shows confidence and maturity.

“The same holds completely true for Starbucks, Nike and Apple. When each one of those companies simplified their logos, it signaled the arrival of maturity, strength and dominance, in an all too crowded world. When a company believes they can safely remove core elements from their logo, and that logo then, somehow, becomes stronger than more iconic than before, well, that’s just magic.” Graham Smith

Getting rid of drop shadows

Clean means simple and simple means flat. This logo trend has been going on as long as material design has. So while not really new, it is nonetheless going strong. More and more companies are deciding to freshen up their logos so they fit into this new era.

Rolling Stone magazine’s iconic logotype dating back to the 60s and Rick Griffin qualifies as an art piece by now. It’s changed a lot throughout the years but had always kept that 3D shadow, considered modern back in the day. Even if the time has come to say goodbye to the shadow, they managed to keep it authentic. The new logo fits into the history of the magazine.

In 2014, Pizza Hut changed their logo. They ditched a shiny colorful version for organic hand lettering which they’d designed in 2010. For the new logo they went monochrome with an inverted hut and text, leaving a pizza-shaped background. More interestingly, they’ve recently started using a version they’d designed in the late 60s. They only use it in certain campaigns, but it fits better with the modern minimal trends than its successor does.

Analog is the new digital

Technological innovation does great things but it can feel sterile and even monotonous at the same time. Since high-quality screens show every tiny detail of a picture, we can put some details back into our logo designs.

Back in the days of analog printing, you could easily distinguish how designers created an illustration. It mattered a lot what kind of paper you printed it on. We’ve forgotten these techniques since computers and digital printing came into the picture. Maybe the time’s come to dig into graphic design history?

We humans love to look back on previous generations. In 2018 and ‘19, we are reliving our parents’ youth. Think about Stranger Things and the Chernobyl hype out there. No wonder it’s coming for logo trends as well.

Graphic designers and illustrations still like screen printing even though it comes from the last century when the demand for reproduction printing techniques emerged. For it, you print one color at a time onto the paper, meaning you have to mind their order. It always uses full-color paint, so if you want to print shadows, you have to either use a different color or print a dotted pattern which creates the illusion of a shadow.

The new logo for Luna Park – a 100-year-old amusement park in Melbourne- uses the dotted shading technique, obviously designed for digital printing (and online usage). The bold colors and purple outline makes this design a crazy and fun experience.

Much simpler than the previous example, Paypal’s logo nonetheless provides a perfect example of screen printing. They print two blues on top of each other to create a third in the overlap.

Predictions for the future of logo trends

Trends also come and go in logo design, but it doesn’t mean we can’t come up with timeless ideas. First and foremost, a logo represents the company and its values. In which style we make that happen depends greatly on the era we’re living in and what the tools we’re using.

We live in a time when creativity has no physical limits anymore, so we truly can design anything we want. In the last couple of years, designers have experimented with minimalism and how much they can take away from a symbol without making it unrecognizable.

In the very near future, this trend will take a radical turn and designers will seek organic forms with a bit more craft and history. If you need inspiration, we wrote a great article on where to seek out ideas for your design work. If you also have ideas about the future of logo design, don’t hesitate to write them in the comments – we would love to hear them!

Feel free to read our last week’s article, where you can learn about the most crucial landing page design elements that will generate more leads and increase conversion rates for your business.