Xeropan is a pedagogical game built by teachers of English as a foreign language. By playing, learners can get a level of instruction and results that are usually only possible in a real-life classroom. In 2018 we worked on the UX of this app, this time we focused on the UI and visual storytelling.

In the fall of 2019, Xeropan’s CEO reached out to us because, although he was receiving great feedback on his product, his conversions in the app stores weren’t living up to his expectations. Additionally, he had the feeling that his ratio of paying customers to total users could be improved.

In order to solve the problems at hand, Antoine, our researcher,  first needed to understand the causes of these problems.

To increase conversions, he had to explore which part of the funnel could be improved and what was the problem in the first place, so he decided to ask potential users to find the app, download it and play around with it while leading him through their impressions, thoughts, and questions.

To find a way to increase the ratio of paying users, Antoine also asked participants what difference they saw between the free and premium plans, in terms of value. Also, he questioned them about their willingness to pay. He then asked them about past experiences where they had paid for a similar service, to understand the motivations that triggered the buying decision.

The most important findings from this discovery phase were the following:

The company wanted to act on this right away, so UX studio set up a two-person team: Dóri, a skilled UX researcher, and myself, a UX designer with a strong background in visual design. Together, we came up with a one month experiment.

Our hypothesis was that the main reason people don’t connect with the design is because of the too-powerful presence of the main character (or mascot), Professor Max, and a very colorful and playful storyline about his time travel adventures. Since this story was the first impression users would get after downloading the app, they could rightfully think that the lessons were not serious enough.

We asked testers on UsabilityHub to give us their feedback on the original version and three modified versions. We conducted Five Second Testing to ask about their impressions of Professor Max. After that, we showed them the App Store mockups and asked the following questions:

Parallelly, we conducted in-person interviews with prototypes, where we asked the same questions and tried to understand the reasons behind the answers.

02 – With a younger professor teacher

Based on the results of the preference tests, we consulted with the client and decided to continue the collaboration. We chose the last concept, the fully redesigned version, and agreed on a 3-month long project plan during which we would redesign the main screens of the application, develop a new visual language and help Xeropan implement them with illustration and imagery guidelines.

The goal of the redesign was to improve app-store conversions and retention by adapting the visual language and value proposition to the people who were most willing to pay for the product while keeping the gamification and story aspects of the app.

When you first download the app, you’re presented with an onboarding where you can select your language, goals, and current English level, and get introduced to the story. The app has 13 levels based on language difficulty. Most people downloading the application are beginners; they start on level 0 or 1.

Since we didn’t want to change the structure of the lessons, we had to build around them. Obviously, the most significant change happened on the level screens: 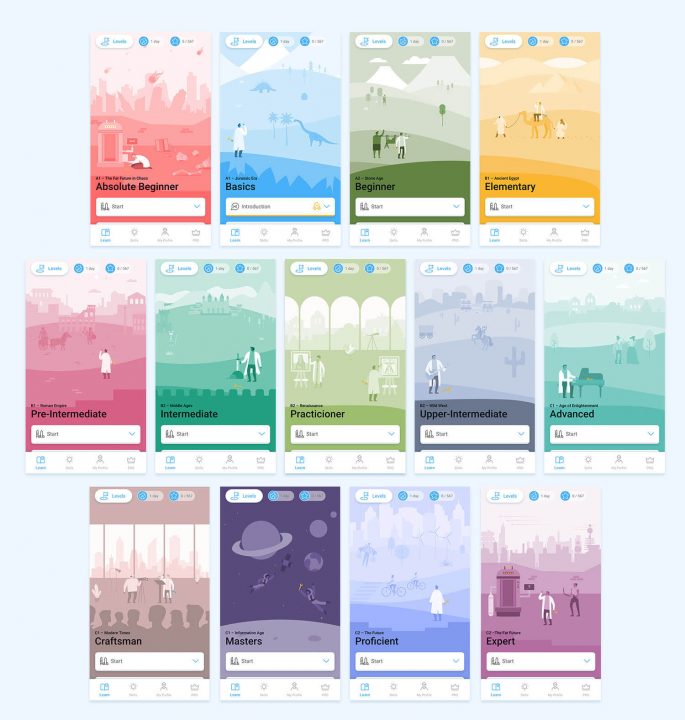 We met with users who thought the story was motivating and liked the playfulness of the app as well as people who only focused on completing the lessons with a perfect score (3 stars).

To motivate both user groups a bit more and to help them connect with the topic of the levels, we came up with Bonus lessons they can unlock after collecting a certain amount of stars.

To give an example: In the first level, the Jurassic Era, bonus lessons teach you about dinosaurs, the Big Boom, and the Jurassic Park movie. You can unlock them one-by-one by completing the “regular” lessons of the level. Since they are not obligatory, the story is not forced on everyone, but it engages those who are motivated by it.

These topics are not final: to test our idea we came up with some placeholders until Xeropan’s content team took it over

But what will the existing users think?

When we chose the new design, we based our decision on the reaction of the potential target audience. But to make it successful, we had to be sure existing users can get used to the change as well.

Towards the end of the three months, when most of the main pages were in the prototype already, we invited the biggest fans: people who’ve been using Xeropan for years and saw all the changes that happened previously in the app. We were super excited and somewhat nervous to hear their opinion.

All in all, even though older users need some more time to get used to the new design, we felt the interviews were a great success: we were confident that we solved the problem we were hired to solve. We found the border between childish and gamified and managed to push Xeropan to the right side: now, it is truly a playful way to learn languages for both children and adults.

Usually, when we have to redesign a product, the structural and navigational problems are far more important to solve. But this time – since we tackled those problems in our previous collaborations with Xeropan – we had the chance to test them again and fine-tune them while working on the new UI.

Changing a couple of buttons and simplifying the Profile section might seem like a small thing, but we often forget that the user experience is never finished. Going back and improving on our previous decisions is just as important as redesigning something from the ground up.

Half a year passed since the release of the new design so we asked Xeropan’s CMO if they’ve noticed any change in app downloads and retention? He said:
“It is quite hard to separate the design-related changes from other, external effects (the release happened in the summer when a lot of people were “set free” from home due to covid). It took us some months to reach and exceed the download numbers we had in the spring. However, we do see a 3% progress in the Day 1 retention numbers and a 5% decrease in trial cancellations on iOS platforms.”

One more very interesting feedback we got from Attila, the CEO is that “comments regarding the childish look&feel completely disappeared since the release of the new design”. 🎉

All in all, we think that the collaboration with the Xeropan team was a successful one, and we cannot wait to hear your thoughts and feedback! Feel free to try it for yourselves and let us know what you think!

Should you want to improve the design and performance of your digital product, message us to book a consultation with us. We will walk you through our design processes and suggest the next steps!

Our experts would be happy to assist with the UX strategy, product and user research, UX/UI design, etc.